Louise always knew she was special. Her five brothers had been sent away, but she’d been saved. She was the chosen one, destined for bigger and better things. From that day forward she vowed to bring back her brothers.

For months she sat on eggs which were never going to hatch. She knew this, because there were no roosters to fertilise them. But she was the chosen one. If it was meant to happen, it would.

Then the family of four humans packed up and moved on, replaced by an odd couple called Mike and Jo. Louise continued to sit on the eggs, hoping for an immaculate conception. She was glad she wasn’t called Mary, like so many other chickens were. That would be a terrible cliche she could never live with.

She continued sitting on eggs all day, everyday, only leaving them briefly so she could eat her dinner. But Jo kept on taking them from her. How were they ever going to hatch?

Then one day, a kind lady from another farm, Jenny, came along with six eggs. She put them in the nesting box, then placed Louise on top of them. This time, nobody stole the eggs from her and she thought she might even have a chance of hatching some. She sat diligently for 3 weeks, never moving. Every couple of days she would get up, turn the eggs over, then sit back down on them again.

Sometimes she would be so hungry, she would have to leave her nest and go in search of food. Jo would see her, pick her up then place her back on the eggs. She thought this was mean, but then Jo would bring her a special meal that she could eat while she continued incubating her little ones.

Then, exactly three weeks later there was movement under her bum. It was finally happening. A shiver of excitement spread through her feathers. Louise was about to become a mum.

She did a great job, and all of her eggs hatched. Louise was now the proud mother of six perfect little chickens. And guess what they were? Yep, five roosters and a hen.

Louise had successfully recreated her family, her mission to bring back her brothers complete. 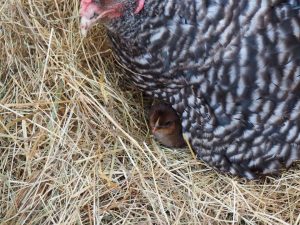 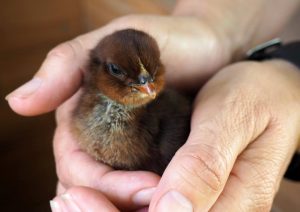 This entry was posted in Blog, Chickens. Bookmark the permalink.