Chicken Tales – In the Beginning

Mike and Jo are full time house sitters and every place they look after is different. Their latest house sit is a small farm called Boggy Bottom, named after to the swamp at the back of the property. They’ve been there since the start of the year and the chickens have been keeping them amused.

The following blog is a true story that was told to them by the previous family that lived there.

Chicken Tales – In the Beginning

Once upon a time, long before Mike and Jo arrived at Boggy Bottom, there lived a family of two adults, two children and their five hens.

Life was good on the farm, with the hens offering their eggs on a daily basis, but the family of humans felt they needed more. One day, a neighbour offered them six roosters. They took the little fellas in and gave them a home. They fed them, housed them, and loved them. Their intentions, however, were not good. Yes, you’ve guessed it. They were rearing them for… the dinner table.

The young human boy picked out one of the roosters to be his pet, and named him Louie. They became best friends, doing everything together. He took him for rides on his bike, they climbed trees, and spent all of their free days together. The boy liked the feel of Louie’s soft feathers when they cuddled. In fact, he loved Louie with all of his heart.

Then came the day when the roosters had to go to the ‘farm in the sky’. Human boy knew exactly what this meant, so he grabbed Louie and ran to the back of the farm and hid. His parents searched for him all day, knowing that he’d be upset about losing his pet. When they eventually found him, they were so relieved that they let him keep his rooster. Louie was saved from the chop. Hooray!

One month later he went to the chicken coop to visit his pet and got the fright of his life. Louie was squawking and seemed to be in terrible pain. What on earth was wrong with him? Boy panicked and ran to find his father. ‘Dad, Dad, come quickly, Louie’s in pain, he needs to go to the vet!’

His father raced after his son, silently cursing not having sent the rooster for the chop. There was no way he’d be taking the stupid thing to the vet. He’d wring his neck if need be.

The both arrived back at the coop and Louie was no longer squawking. The boy picked up his pet and cuddled him, saying over and over, ‘It’s okay Louie, it’s okay,’ trying his best to comfort him. The boy’s father guffawed loudly.

Boy wondered what was so funny.

‘Look son,’ his father said, pointing to where Louie had been sitting.

The boy looked down. Sitting proudly on top of a pile of hay was… can you guess?

His father laughed and said, ‘Looks like Louie isn’t a rooster after all!’

From that day on Louie became Louise. 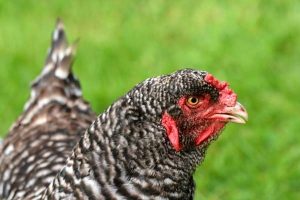